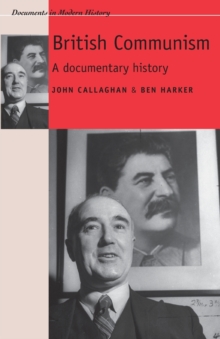 Part of the Documents in Modern History series

Wide-ranging and richly researched, this is the first sourcebook to reconstruct the tumultuous history of the Communist Party of Great Britain. Drawing together over one hundred and fifty documents-including party statements, press releases, published correspondence, reviews, poems, cartoons and articles-it presents a detailed portrait of the party, its abiding concerns and its many contradictions from the 1920s to the 1980s. It samples voices from the full spectrum of the party's diverse personnel, from longstanding party leaders (Harry Pollitt, Rajani Palme Dutt), to prominent twentieth-century British intellectuals (E.

Lloyd). Balanced, comprehensive and framed by Callaghan and Harker's detailed introductions, British Communism: A documentary history is not only a valuable addition to the historiography of Communism, but to the study of twentieth-century Britain. -- .