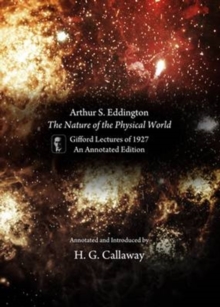 The nature of the physical world : Gifford Lectures of 1927

He made major contributions to astrophysics and to the broader understanding of the revolutionary theories of relativity and quantum mechanics.

He is famed for his astronomical observations of 1919, confirming Einstein's prediction of the curving of the paths of starlight, and he was the first major interpreter of Einstein's physics to the English-speaking world.

His 1928 book, The Nature of the Physical World, here re-issued in a critical, annotated edition, was largely responsible for his fame as a public interpreter of science and has had a significant influence on both the public and the philosophical understanding of 20th-century physics.

In degree, Eddington's work has entered into our contemporary understanding of modern physics, and, in consequence, critical attention to his most popular book repays attention.Born at Kendal near Lake Windermere in the northwest of England into a Quaker background, Eddington attended Owens College, Manchester, and afterward Trinity College, Cambridge, where he won high mathematical honors, including Senior Wrangler.

He became Plumian Professor of Astronomy at Cambridge in 1913 and in 1914 Director of the Cambridge Observatory.

Eddington was a conscientious objector during the First World War.

By the end of his career, he was widely esteemed and had received honorary degrees from many universities.

Eddington was knighted in 1930 and received the Order of Merit in 1938.

During the 1930s, his popular and more philosophical books made him a well known figure to the general public.

Philosophers have found his writings of considerable interest, and have debated his themes for nearly a hundred years.