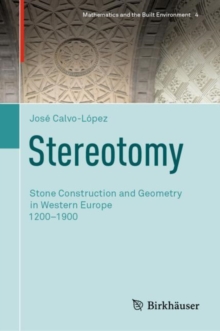 Part of the Mathematics and the Built Environment series

This book deals with the general concepts in stereotomy and its connection with descriptive geometry, the social background of its practitioners and theoreticians, the general methods and tools of this technology, and the specific procedures for the members built in hewn stone, including arches, squinches, stairs and vaults, ending with a chapter discussing the open problems in this field.

Thus, it can be used as a reference book in the subject, but it can also read as a compelling narrative on this subject, one of the main branches of pre-industrial technology. Construction in hewn stone requires the use of geometrical methods and tools to assure that individual stones, either blocks or voussoirs, fit with one another and conform to the general shape of walls, arches or vaults.

During the Late Middle Ages and the Renaissance, such techniques and instruments were developed empirically by masons and architects.

Later on, learned mathematicians and engineers introduced refinements in these procedures and this branch of knowledge, known as stereotomy, furnished much material to descriptive geometry, a science born with the French Revolution which provided the foundation for projective geometry.