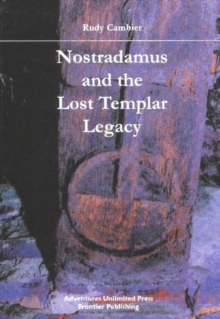 Rudy Cambier's decade long research and analysis of the verses of Nostradamus' 'prophecies' has shown that the language of those verses does not belong in the 16th Century, nor in Nostradamus' region of Provence.

The language spoken in the verses belongs to the medieval times of the 14th Century, and the Belgian borders.

The documents known as Nostradamus' prophecies were not written in ca. 1550 by the French 'visionary' Michel de Nostradame.

Instead, they were composed between 1323 and 1328 by a Cistercian monk, Yves de Lessines, prior of the abbey of Cambron, on the border between France and Belgium.

According to the author, these documents reveal the location of a Templar treasure.

This key allowed Cambier to translate the 'prophecies'.

But rather than being confronted with a series of cataclysms and revelations of future events, Cambier discovered a possible even more stunning secret.

Yves de Lessines had waited for many years for someone called 'l'attendu', the expected one.

This person was supposed to come to collect the safeguarded treasures of the Knights Templar, an organisation suppressed in 1307.

But no-one came. Hence, the prior decided to impart the whereabouts and nature of the treasure in a most cryptic manner in verses. 220 years later, this document was stolen from a library by Nostradamus, who would make the enigmatic texts world famous, claiming they were 'prophecies'.

The story, however, does not end here. The location identified in the documents and discovered by Cambier has since been shown to indeed contain what Yves de Lessines said they would contain: barrels of gold, silver and documents.