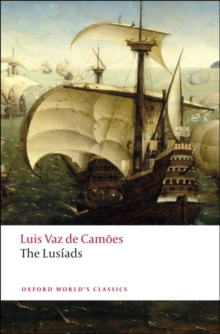 First published in 1572, The Lusiads is one of the greatest epic poems of the Renaissance, immortalizing Portugal's voyages of discovery with an unrivalled freshness of observation.

At the centre of The Lusiads is Vasco da Gama's pioneer voyage via southern Africa to India in 1497-98. The first European artist to cross the equator, Camoes's narrative reflects the novelty and fascination of that original encounter with Africa, India and the Far East.

The poem's twin symbols are the Cross and the Astrolabe, and its celebration of a turning point in mankind's knowledge of the world unites the old map of the heavens with the newly discovered terrain on earth. Yet itspeaks powerfully, too, of the precariousness of power, and of the rise and decline of nationhood, threatened not only from without by enemies, but from within by loss of integrity and vision.

The first translation of The Lusiads for almost half a century, this new edition is complemented by an illuminating introduction and extensive notes.