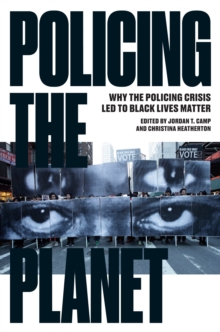 Policing the planet : why the policing crisis led to Black Lives Matter

Combining firsthand accounts from activists with the research of scholars and reflections from artists, Policing the Planet traces the global spread of the broken-windows policing strategy, first established in New York City under Police Commissioner William Bratton.

It's a doctrine that has vastly broadened police power the world over-to deadly effect.