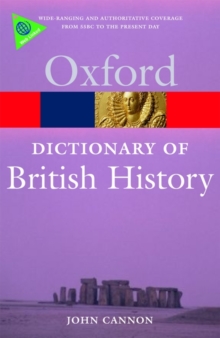 A dictionary of British history

By: Cannon, John (University of Newcastle upon Tyne (retired))(Edited by)

Who was the first King of England? What prompted the Cat and Mouse Act? When was Wembley stadium demolished? Where did the Rebecca riots take place? How long did the Hundred Years War last? Containing more than 3,800 authoritative entries written by over 100 specialist contributors, this dictionary describes the people and events that have shaped and defined domestic, political, social, and cultural life in Britain since 55 BC.

New entries to this edition include Gordon Brown, David Cameron, Gerry Adams, and Rowan Williams and existing entries on Tony Blair, Iraq, Northern Ireland, and terrorism have been updated.

Web links are conveniently accessed via the Dictionary of British History companion website, where they are regularly checked and kept up to date.

Derived from the highly acclaimed The Oxford Companion to British History, A Dictionary of British History has been a leading historical reference work since its publication in 2001.

Now thoroughly revised and fully updated, this handy and invaluable A-Z remains essential for anyone studying or with an interest in British history as well as for those in need of a compact reference book covering 2,000 years of people, events, places, and change.