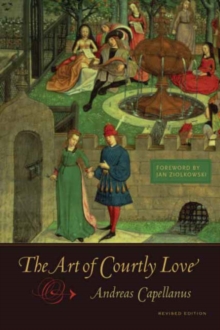 The Art of Courtly Love

Marriage is no real excuse for not loving. & nbsp;& nbsp; That which a lover takes against the will of his beloved has no relish. & nbsp;& nbsp; When made public love rarely endures. & nbsp;& nbsp;Love can deny nothing to love.Published in the twelfth century, Andreas Capellanus's canonical The Art of Courtly Love had a major impact on the culture of medieval Europeans and relates centrally to Arthurian romance, troubadour lyric, and other genres.

More than just a list of rules and advice, the book has been remarkably influential in modern understandings of the Middle Ages, especially of the phenomena known as courtly love.

Is it a time capsule of social laws and customs that prevailed in courts? Or was it a flight of fancy that mocked such etiquette?

Debates over its nature and meaning have been unending.

Its style and concerns contributed long and significantly to English literature, and for centuries its attitudes and practices reflected and may even have shaped thinking and behavior about love in Western civilization.

Renowned medievalist Jan M. Ziolkowski has revised the standard translation of the work from the original Latin, maintaining its lively tone and sophisticated play with character and sentiment.

He has also written a foreword highlighting the work's continued relevance and updated the bibliography with new critical sources.