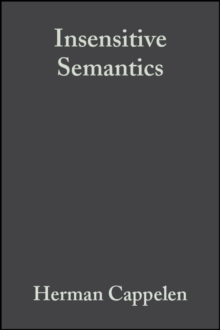 Since the end of the nineteenth century, philosophy of language has been plagued by an extensive and notoriously confusing literature on how to draw the distinction between semantic and non-semantic content.

This debate, at its deepest level, is about how to accommodate context sensitivity within a theory of human communication.

Insensitive Semantics is a book about this debate, investigating the effects of context on communicative interaction and, as a corollary, what a context of utterance is and what it is to be in one.

To this end, the authors defend a combination of two views: semantic minimalism and speech act pluralism.

If these views are right, then many philosophers and linguists are guilty of some profound mistakes, with wide-ranging implications for not only philosophy of language but also epistemology, metaphysics, moral philosophy, and other branches of philosophy.