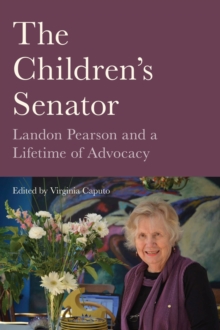 The Children's Senator : Landon Pearson and a Lifetime of Advocacy

The Honourable Landon Pearson's domestic and global advocacy efforts with, for, and on behalf of children and young people have unfolded over a period of sixty years including thirty years in the Canadian Foreign Service and eleven years in the Senate of Canada.

Two of the key ideas that frame her vision are that as rights holders, children have a right to participate in matters that affect their lives, and that every child needs at least one adult to provide steadfast and consistent support.

Pearson's professional career and aspects of her personal life, including her experience as a parent of five children, merge in a fascinating account of Canada's premier children's rights advocate.

An intimate and compelling collection, The Children's Senator celebrates Pearson as a catalyst of change in Canada and internationally.