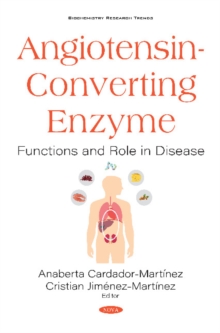 Angiotensin-converting enzyme (ACE) is a well-known zinc-metallopeptidase that converts angiotensin I to the potent vasoconstrictor angiotensin II and degrades bradykinin, a powerful vasodilator, both for the regulation of vascular tone and cardiac functions.

Other natural substrates of ACE were identified broadening the functions of this enzyme within different physiological contexts such as neuronal metabolism, hematopoiesis, digestion, and reproduction.

In this context, ACE has an essential role in diseases, for instance, hypertension, Alzheimers disease, oxidative stress, sperm maturation and fertility, intraocular pressure, bone metabolism, fibrillary glomerulonephritis, among others.

This book describes the role of ACE as a part of the Renin-Angiotensin-System, on different metabolic processes related to some diseases, such as the examples already mentioned.

Moreover, ACE is related to adipose tissue. The modulation of ACE can modulate hypertension and diseases related to this enzyme.

Captopril is the first successful ACE inhibitor in the treatment of hypertension; however, it has adverse effects such as dry cough, dizziness, lightheadedness or loss of taste and others.

The search for alternatives to Captopril has increased research on bioactive peptides.

Then, several book chapters describe how ACE can be modulated by bioactive peptides, which are short amino acid sequences previously encrypted in whole proteins and liberated through the digestion process.

Animal and vegetal proteins can be used as a source of bioactive peptides.

Milk, milk-derived food products and lionfish are examples of animal proteins, while several legumes such as beans and peanuts are vegetable sources of bioactive peptides.