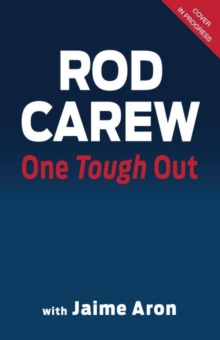 One tough out : fighting off life's curveballs

For a generation of American League baseball fans, Rod Carew was the definition of "batting champion." An insecure boy from Panama raised by a brutal father, Carew ascended to baseball stardom, tormenting pitchers with a smooth swing from a crouched stance and winning seven batting titles on his way to the Hall of Fame. It wasn't until he lost his beautiful 17-year-old daughter to an aggressive and rare form of leukemia that Carew had to re-gather himself and find new purpose outside of baseball.

Then he was struck with a near-fatal heart attack and discovered that the heart transplant he received came from a 29-year-old pro football player whom he happened to have met years before.

Now the parents of Konrad Reuland listen to their son's heart beating strong in Carew's chest, and Carew works to honor his daughter's wish that he "make a difference." One Tough Out is an unforgettable story of insight, inspiration, and faith.

Carew uses his own journey to show readers that regardless of what you may be facing -- heart disease, cancer, divorce, an abusive relationship, premature retirement -- you can persist and grow with the kind of grace, character, and determination that he learned to cultivate on the field and beyond.