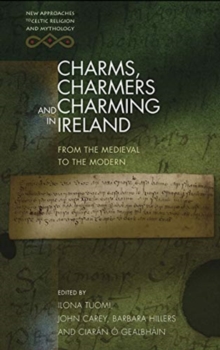 Charms, charmers and charming in Ireland : from the medieval to the modern

Part of the New Approaches to Celtic Religion and Mythology series

This is the first book to examine the full range of the evidence for Irish charms, from medieval to modern times.

As Ireland has one of the oldest literatures in Europe, and also one of the most comprehensively recorded folklore traditions, it affords a uniquely rich body of evidence for such an investigation.

The collection includes surveys of broad aspects of the subject (charm scholarship, charms in medieval tales, modern narrative charms, nineteenth-century charm documentation); dossiers of the evidence for specific charms (a headache charm, a nightmare charm, charms against bleeding); a study comparing the curses of saints with those of poets; and an account of a newly discovered manuscript of a toothache charm.

The practices of a contemporary healer are described on the basis of recent fieldwork, and the connection between charms and storytelling is foregrounded in chapters on the textual amulet known as the Leabhar Eoin, on the belief that witches steal butter, and on the nature of the belief that effects supernatural cures.