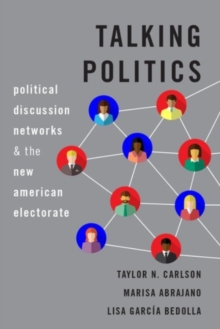 Over five decades of research has made clear that social networks can have an important impact on our political behavior.

Specifically, when we engage in political conversation within these networks we develop connections that increase the likelihood that we will become politically active.

Furthermore, any studies of networks have, by and large,been based on White Americans.

Given what we know about the ways in which neighborhood, cultural, friend, and family networks tend to segregate along ethnic and racial lines, the authors of this book argue that we can assume that political networks segregate in much the same way.

The book thus makes three key contributions: 1) it provides, for the first time, detailed comparative analysis of how political networks vary across and within ethnoracial groups; 2) demonstrateshow historical differences in partisanship, policy attitudes, and engagement are reflected within groups' social networks; and, 3) reveals the impact that networks can have on individuals' political and civic engagement.