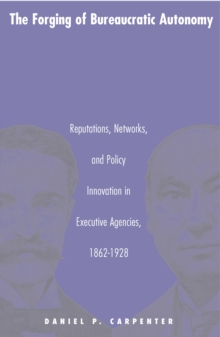 The Forging of Bureaucratic Autonomy : Reputations, Networks, and Policy Innovation in Executive Agencies, 1862-1928

Until now political scientists have devoted little attention to the origins of American bureaucracy and the relationship between bureaucratic and interest group politics.

In this pioneering book, Daniel Carpenter contributes to our understanding of institutions by presenting a unified study of bureaucratic autonomy in democratic regimes.

He focuses on the emergence of bureaucratic policy innovation in the United States during the Progressive Era, asking why the Post Office Department and the Department of Agriculture became politically independent authors of new policy and why the Interior Department did not.

According to the author, bureaucracies with unique goals achieve autonomy when their middle-level officials establish reputations among diverse coalitions for effectively providing unique services.

These coalitions enable agencies to resist political control and make it costly for politicians to ignore the agencies' ideas. Carpenter assesses his argument through a highly innovative combination of historical narratives, statistical analyses, counterfactuals, and carefully structured policy comparisons.

Along the way, he reinterprets the rise of national food and drug regulation, Comstockery and the Progressive anti-vice movement, the emergence of American conservation policy, the ascent of the farm lobby, the creation of postal savings banks and free rural mail delivery, and even the congressional Cannon Revolt of 1910.