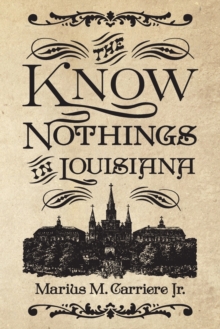 The Know Nothings in Louisiana

In the 1850s, a startling new political party appeared on the American scene.

Both its members and its critics called the new party by various names, but to most it was known as the Know Nothing Party.

It reignited political fires over nativism and anti-immigration sentiments.

At a time of political uncertainty, with the Whig party on the verge of collapse, the Know Nothings seemed destined to replace them and perhaps become a political fixture.Historian Marius M.

Carriere Jr. tracks the rise and fall of the Know Nothing movement in Louisiana, outlining not only the history of the party as it is usually known, but also explaining how the party's unique permeation in Louisiana contrasted with the Know Nothings' expansion nationally and elsewhere in the South.

For example, many Roman Catholics in the state joined the Know Nothings, even though the party was nationally known as anti-Catholic. While historians have largely concentrated on the Know Nothings' success in the North, Carriere furnishes a new context for the evolution of a national political movement at odds with its Louisiana constituents.

Through statistics on various elections and demographics of Louisiana politicians, Carriere forms a detailed account of Louisiana's Know Nothing Party.

Carriere delineates the eventual downfall of the Know Nothing Party, while offering new perspectives on a nativist movement, which has appeared once again in a changing, divided country.