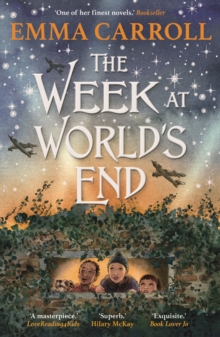 The week at World's End

1962, London during the Cuban Missile CrisisWhat would you do if there was a real possibility that the world might end?Ray, aware of his parents' building worry, decides to take matters into his own hands.

He builds a shelter in the woods behind his house in the hope that he never has to use it.

Only to discover that someone else needs it more than he does.

An American girl, reported missing, has turned up there...

Why is she hiding? And with neighbour turning against neighbour, will Ray be willing to help her?

Set over the six days when the Cuban Missile Crisis became public knowledge, this tense, clever thriller might just be Emma Carroll's best book yet!