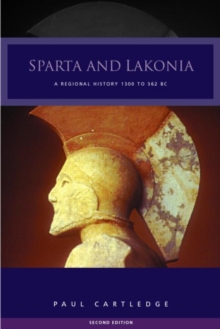 Sparta is one of the best-documented states of ancient Greece.

Its political and social systems have fascinated and perplexed generations of classical scholars, as well as having a powerful influence on European civilization to this day.

In this fully revised and updated edition of his groundbreaking study, Paul Cartledge uncovers the realities behind the potent myth of Sparta.

The book explores both the city-state of Sparta and the territory of Lakonia which it unified and exploited.

Combining the more traditional written sources with archaeological and environmental perspectives, its coverage extends from the apogee of Mycenaean culture, to Sparta's crucial defeat at the battle of Mantinea in 362 BC.

One of the major themes examined is the relationship between the Spartans, the Perioikoi (the free but politically disenfranchised) and the Helots (unfree peoples).

Cartledge demonstrates convincingly that the system of land-tenure based on the exploitation of the helots carried within it the seeds both of Spartan grandeur, and of Spartan decadence.