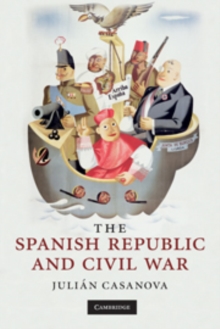 The Spanish Republic and civil war

The Spanish Civil War has gone down in history for the horrific violence that it generated.

The climate of euphoria and hope that greeted the overthrow of the Spanish monarchy was utterly transformed just five years later by a cruel and destructive civil war.

Here Julian Casanova, one of Spain's leading historians, offers a magisterial new account of this critical period in Spanish history.

He exposes the ways in which the Republic brought into the open simmering tensions between Catholics and hardline anticlericalists, bosses and workers, Church and State, order and revolution.

In 1936 these conflicts tipped over into the sacas, paseos and mass killings which are still passionately debated today.

The book also explores the decisive role of the international instability of the 1930s in the duration and outcome of the conflict.

Franco's victory was in the end a victory for Hitler and Mussolini and for dictatorship over democracy.