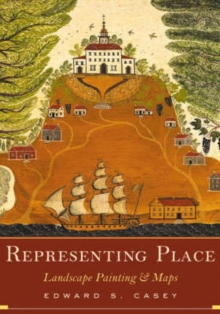 You are here, a map declares, but of course you are not, any more than you truly occupy the vantage point into which a landscape painting puts you.

How maps and paintings figure and reconfigure space-as well as our place in it-is the subject of Edward S.

Casey's ambitious study, an exploration of how we portray the world and its many places.

From these culturally and historically diverse forays a theory of representation emerges.

Casey proposes that the representation of place in visual works be judged in terms not of resemblance, but of reconnecting with an earth and world that are not the mere content of mind or language-a reconnection that calls for the embodiment and implacement of the human subject. Representing Place is the third volume in Casey's influential epic project of reinterpreting evolving conceptions of space in world thought.

He combines history with philosophy, and cartography with art, to create a new understanding of how representation requires and thrives on space, ultimately renewing our appreciation of the power of place as it is set forth in paintings and maps.