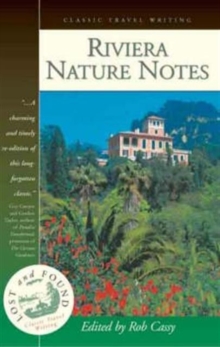 Riviera nature notes : a popular account of the more conspicuous plants and animals of the Riviera and the Maritime Alps

"The spread of the towns, the disforesting of the hills, and other causes are conspiring to destroy many of the conditions which made the Riviera of former days so happy a resort for the lovers of Nature.

But there will always be much to observe and much to study in so favoured a region." Quirky, erudite and eminently readable, the fifty-four essays comprising Riviera Nature Notes give an astonishingly clear picture of plant and animal life in the South of France at the turn of the twentieth century--not to mention a fascinating insight into the social mores of the time. A hundred years later the book is as fresh, topical and inviting as when it was first published.

Preferring to remain anonymous as a naturalist, not only out of modesty but to guard the integrity of his liturgical writings, its clergyman author speaks of olives and pines, myrtles and figs, mosquitoes and rare butterflies--to name but a few of his subjects--with such passion and verve as to bring the land from the Ligurian coastline to the Maritime Alps vividly alive. Published first at the expense of Sir Thomas Hanbury, master of the famed gardens at La Mortola, Italy and benefactor of the Royal Horticultural Society's sixty-acre estate at Wisley, a second edition incorporated photographs taken by the temperamental and extravagant heiress Ellen Wilmot, in many ways a greater figure in the plant world than her close contemporary Gertrude Jekyll.

Our anonymous author moved in the best horticultural and botanical circles, wore his learning lightly, and unusually for the time, spoke to the common man and the general reader on equal terms.

With an engaging, sometimes acerbic, always entertaining and informative voice speaking effortlessly across the years, he will once again garner admirers among nature lovers, gardeners and travellers alike.