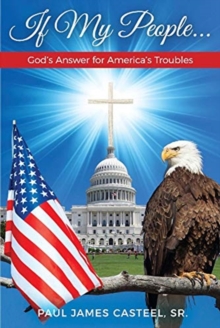 If My People ... : God's Answer for America's Troubles

Basically the ame as short description:September 11, 2001 marked the end of a time when Americans could safely assemble and live without fear of being injured or killed by someone with a drive for destruction.

Violence is on the rise. Dominating TV and radio now are public figures - politicians, businessmen, even clergy who have been exposed because of sex offenses and other crimes over many years.

We can blame the terrorists, anarchist groups, individuals, and politicians.

But evil acts are only symptoms and perpetrators are only scape goats of a much more sinister plot.

For we wrestle not against flesh and blood, but against principalities, against powers, against the rulers of the darkness of this world, against spiritual wickedness in high places.Satan has influenced mankind since Adam and Eve fell.

Now his influence on the American way of life is greater than our ancestors could have ever imagined.

There is a devil named Satan and there is a war going on.

The people committing those terrible acts are controlled by Satan whether they know it or not.

There are two opposing forces in this world - evil and good.Evil is on the news continuously and it dulls the minds even of Christians.

We oppose evil, but what can we do about it? Fortunately, God has already given us the answer in the OT.

Some Christians have diligently pursued it as a lifestyle; some of us have taken at least part of it to heart; but our nation of believers as a whole does not understand that God's answer to America's problems is available to each and every one of us to take hold of to turn our country around.

God has given us a conditional promise in 2 Chr. 7:14. He said, "If my people, which are called by my name, shall humble themselves, and pray, and seek my face, and turn from their wicked ways; then will I hear from heaven, and will forgive their sin, and will heal their land." We must first truly humble ourselves before God and man.

Humility accompanies righteousness and the effectual, fervent prayer of a righteous man accomplishes much.

As we humbly come before God in prayer we recognize our inefficiencies and His greatness.

As we pray we need to seek His face in a way we never even imagined.

We will never visibly see the face of God but we can seek Him so fervently that we begin to understand His will.

As we walk more and more in the Spirit, we will see that the way we live is below what God wants for us; that many of us have put things in the place of God in our lives, making them idols, gods in themselves, dragging our nation down.

As we repent, then and only then, God will forgive us of our sins and heal our land.

America will once again be a God fearing nation, led and prospered by our Father God.

But it's up to us to fulfill the IF. Same