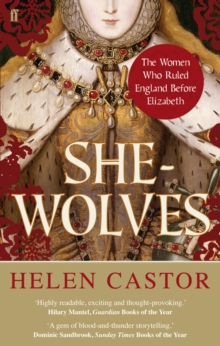 She-wolves: the women who ruled England before Elizabeth

Faber and Faber
0571271723 / 9780571271726
eBook (EPUB)
942.030922
07/10/2010
Available
England
English
357 pages
Copy: 10%; print: 10%
Description based on print version record.
In medieval England, man was the ruler of woman, and the King was the ruler of all. How, then, could royal power lie in female hands?InShe-Wolves, celebrated historian, Helen Castor, tells the dramatic and fascinating stories of four exceptional women who, while never reigning queens, held great power: Matilda, Eleanor of Aquitaine, Isabella of France and Margaret of Anjou. These were women who paved the way for Jane Grey, Mary Tudor and Elizabeth I - the Tudor queens who finally confronted what it meant to be a female monarch.