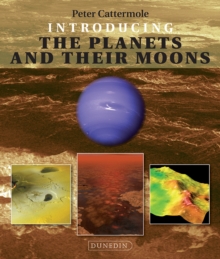 Introducing the planets and their moons

The solar system, of which Earth is but a small part, is an amazing collection of bodies, ranging in size from the Sun, through the giant planet Jupiter, to specks of dust left over from the primordial nebula from which the system emerged.

Excluding the Sun, the eight major planets, together with several dwarf planets and at least 160 orbiting natural satellites, form the main mass of the system These are made from an amalgam of silicate, metal, ice and gas.

Peter Cattermole describes the characteristics and geological development of the eight large planetary bodies and their more substantial moons.

This includes discussion of their orbital properties, magnetic fields, atmospheres and mutual interactions.

Rather than deal with the system planet by planet, his approach is comparative.

This enables the reader to perceive immediately how their position and size led these bodies along different evolutionary paths. The book is copiously illustrated with some of the finest images available, lacks technical equations and terms, and includes a useful glossary for reference.

By using this format, it follows other titles in the same series.