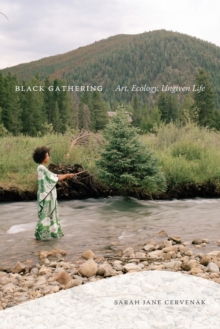 Part of the Black Outdoors: Innovations in the Poetics of Study series

In Black Gathering Sarah Jane Cervenak engages with Black artists and writers who create alternative spaces for Black people to gather free from interruption or regulation.

Drawing together Black feminist theory, critical theories of ecology and ecoaesthetics, and Black aesthetics, Cervenak shows how novelists, poets, and visual artists such as Gayl Jones, Toni Morrison, Clementine Hunter, Samiya Bashir, and Leonardo Drew advance an ecological imagination that unsettles Western philosophical ideas of the earth as given to humans.

In their aestheticization and conceptualization of gathering, these artists investigate the relationships among art, the environment, home, and forms of Black togetherness.

Cervenak argues that by offering a formal and conceptual praxis of gathering, Black artists imagine liberation and alternative ways of being in the world that exist beyond those Enlightenment philosophies that presume Black people and earth as given to enclosure and ownership.