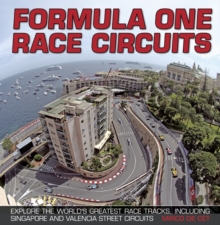 This is a country-by-country survey of the changing architecture of the most famous Formula One race tracks of the world, from the 1950s to the present day.

It explains how the changes in circuit design have affected motor racing, and the radical new designs that make Formula One fit for purpose in the 21st century.

It includes comprehensive tables of statistics listing the circuits that have held Formula One races since 1950, plus names of championship drivers and constructors.

Formula One drivers face enormous physical challenges, moving at top speed while twisting and turning around the race track.

Every circuit has its own special demands and characteristics, and this book is both an exciting history and a guide to the top circuits of the world. It covers the tracks of Australia, Monaco, the United States, Brazil, and many more, each section featuring a map of the circuit and a detailed description of the layout - the length of each straight, the number of turns and the main architectural features.

It explains where the tracks are in the world, and how to get there.

Tables of statistics list the winning drivers, from Nino Farina to Michael Schumacher and beyond.

So whether you're already a frequent visitor to Formula One races or hope to go to one in the future, this book will surely prove invaluable.