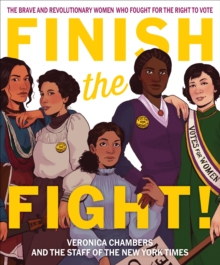 Finish the fight! : the brave and revolutionary women who fought for the right to vote

By: Chambers, Veronica,  The Staff of the New York Times

This exciting collaboration with the New York Times will reveal the untold stories of the diverse heroines who fought for the 19th amendment.

On the 100th anniversary of the historic win for women's rights, it's time to celebrate the names and stories of the women whose courage helped change the fabric of America. AGES: 8 to 12 AUTHOR: Veronica Chambers is the editor of Past Tense at The New York Times.

She recently created the anthology "The Meaning of Michelle," a collection by 16 writers celebrating the former first lady, and edited the upcoming "Queen Bey: A Celebration of the Power and Creativity of Beyonce Knowles-Carter." She is a prolific author, best known for her critically acclaimed memoir, Mama's Girl.

Born in Panama and raised in Brooklyn, she writes often about her Afro-Latina heritage.

She speaks, reads, and writes Spanish, but she is truly fluent in Spanglish.

She is currently a JSK Knight fellow at Stanford University.