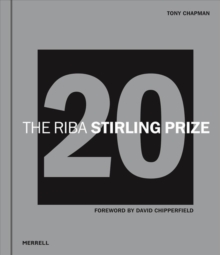 The Stirling Prize is one of the world's most prestigious architectural awards.

Named after Sir James Stirling (1926-1992), one of Britain's greatest post-war architects, the prize is awarded annually by the Royal Institute of British Architects (RIBA) to the architects of the building that has made the most significant contribution in the past year to the evolution of architecture and the built environment.

The list of shortlisted and winning buildings since the prize began in 1996 - among them such diverse projects as the Media Centre at Lord's Cricket Ground by Future Systems; Herzog & de Meuron's Laban dance centre in Deptford, southeast London; and the Maxxi National Museum, Rome, by Zaha Hadid Architects - reads like a primer to the very best of contemporary British architecture both at home and elsewhere in the European Union.

Insightfully written by Tony Chapman, the former Head of Awards at the RIBA, this book honours all the shortlisted and winning buildings from the first 20 years of the prize.

Authoritative, detailed commentaries explain how each winning building was planned and constructed, and reveal the thoughts of the Stirling jury; commentaries are also included for the shortlisted buildings from the most recent decade of the prize, 2006-15.

Chapman's introduction reviews the history of the award from its low-key beginnings at a time when Britain was just emerging from a period of economic recession to the present day, when the prize, and indeed architecture in general, has a far greater public profile.

Illustrated throughout with photographs, drawings and plans, The RIBA Stirling Prize 20 is a true celebration of British architectural talent. SELLING POINTS: A showcase of all shortlisted and winning buildings throughout 20 years of one of the world's best-known architectural awards AUTHOR: Tony Chapman was Head of Awards at the Royal Institute of British Architects from 1998 to 2016.

He was made an Honorary Fellow of the RIBA in 2011. Sir David Chipperfield is one of the UK's most lauded architects.

In 1985 he established David Chipperfield Architects, which has won more than 100 international awards, including the RIBA Stirling Prize in 2007.