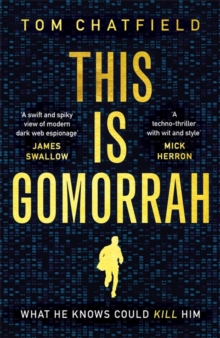 An exclusive online marketplace where anything and everything is for sale.

But they've left a clue to their deadly next move . . . THIS IS THE MAN WHO CAN STOP THEM. Lonesome hacker Azi Bello is nobody's idea of a hero.

Except his skills have caught the attention of a mysterious espionage unit, who think he might have what it takes to stop this evil force.

Sent on a mission which could cost him his life, Azi's ultimate destination is Gomorrah.

But can he make it out alive?Praise for THIS IS GOMORRAH:'The classic twenty-first century thriller' Michael Ridpath'A swift and spiky view of modern dark web espionage' James Swallow'A techno-thriller with wit and style' Mick Herron 'A beguiling blend of riveting hacker lore, sharp dialogue and inventive action scenes' Sunday Times 'Tense . . . a well-told, fast-paced story packed with contemporary relevance' Adam HamdyWhat readers have said about THIS IS GOMORRAH:'Unputdownable''One of the best thrillers I have read so far this year' 'I am lost for words to describe just how spectacular this book is . . . a must read' 'This is one of the best books I have read so far this year, a clever rollercoaster of a ride and I cannot wait for the next book in this series''There was no way that I could predict some of the wild directions this thriller took.