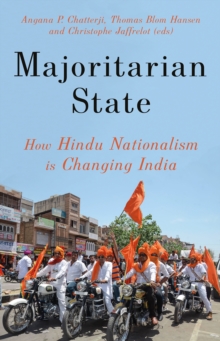 Led by Prime Minister Narendra Modi, the BJP administration has established an ethno-religious and populist style of rule since 2014.

Its agenda is also pursued beyond the formal branches of government, as the new dispensation portrays conventional social hierarchies as intrinsic to Indian culture while condoning communal and caste- and gender-based violence. The contributors explore how Hindutva ideology has permeated the state apparatus and formal institutions, and how Hindutva activists exert control over civil society via vigilante groups, cultural policing and violence.

Groups and regions portrayed as 'enemies' of the Indian state are the losers in a new order promoting the interests of the urban middle class and business elites.

As this majoritarian ideology pervades the media and public discourse, it also affects the judiciary, universities and cultural institutions, increasingly captured by Hindu nationalists.

Dissent and difference silenced and debate increasingly sidelined as the press is muzzled or intimidated in the courts.

Internationally, the BJP government has emphasised hard power and a fast- expanding security state. This collection of essays offers rich empirical analysis and documentation to investigate the causes and consequences of the illiberal turn taken by the world's largest democracy.