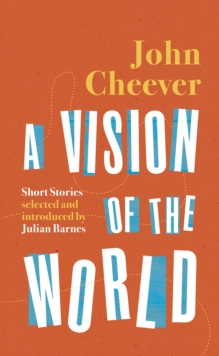 A vision of the world : selected short stories

By: Cheever, John,  Barnes, Julian(Introduction by)

**A TIMES BEST BOOK TO READ THIS SUMMER**The first authorised selected collection of the twentieth-century's most influential short story writer. SELECTED AND INTRODUCED BY JULIAN BARNESWinner of the Pulitzer Prize and the National Book Award, John Cheever - variously referred to as 'Ovid in Ossining' and the 'Chekhov of the suburbs' - forever altered the landscape of contemporary literature.

In a career that spanned nearly fifty years, his short stories, often published in the New Yorker, gave voice to the repressed desires and smouldering disappointments of 1950s America as it teetered on the edge of spiritual awakening and sexual liberation in the ensuing Sixties.

Up until now, John Cheever's stories have only been available in Collected Stories, but with Julian Barnes' selection we have the first fully authorised introduction to Cheever's work.

Satirical, fantastical, sad and transcendent, these are stories that speak directly to the heart of human experience, and remain a testament to the wit and vision of one of the most important and influential short story writers of the twentieth century. 'Reading Cheever is a restless pleasure, the work never settles: these brilliant stories make me get up and walk around the room' Anne Enright