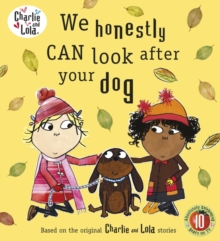 We honestly can look after your dog

We honestly can look after your dog

Part of the Charlie and Lola series

Charlie and Lola, first seen in I Will Not Ever NEVER Eat a Tomato, are set to be stars of the screen and page.

A major animation acquisition for the BBC and first airing on prime time children's TV in October 2005, Charlie and Lola are set for superstardom!

Lola loves dogs. So when Charlie takes Lola and her friend Lotta to the park with his friend Marv and Marv's dog Sizzles, Lola is thrilled.

Marv lets her and Lotta look after Sizzles on the promise that they don't let him off the lead.

But Lola and Lotta are so over-excited that, of course, they let Sizzles go and then have a panicky search for him all round the park.

Imagine their relief when Sizzles appears until he's followed by an identical dog.

They know that Sizzles is extremely very clever and so can tell which dog is the right Sizzles - he's the one that he sits down when they tell him.

Yet another crisis averted for Lola!