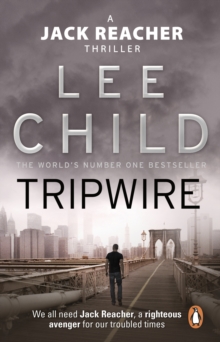 'Lee Child continues his meteoric rise and mastery of suspense with Tripwire.

It's a tightly-drawn and swift thriller that gives new meaning to what a page-turner should be.' Michael ConnellyFor Jack Reacher being invisible has become a habit. He spends his days digging swimming pools by hand and his nights as the bouncer in the local strip club in the Florida Keys.

He doesn't want to be found. But someone has sent a private detective to seek him out.

Then Reacher finds the guy beaten to death with his fingertips sliced off.

It's time to head north and work out who is trying to find him and why. _________Although the Jack Reacher novels can be read in any order, Tripwire is 3rd in the series. And be sure not to miss Reacher's newest adventure, no.26, Better off Dead! ***COMING SOON and AVAILABLE FOR PRE-ORDER NOW***