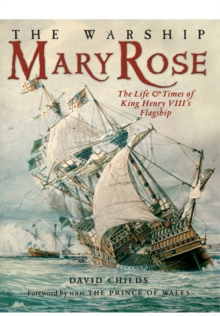 The warship Mary Rose : the life and times of King Henry VIII's flagship

This new paperback edition brings the history of Henry VIII's famous warship right up to date with new chapters on the stunning presentation of the hull and the 19,000 salvaged artefacts in the new museum in Portsmouth.

Mary Rose has, along with HMS Victory, become an instantly recognisable symbol of Britain's maritime past, while the extraordinary richness of the massive collection of artefacts gleaned from the wreck has meant that the ship has acquired the status of some sort of 'time capsule', as if it were a Tudor burial site.

But she is much more than an archaeological relic; she was a warship, and a revolutionary one, that served in the King's navy for thirty-four years, almost the entire length of his reign.

This book tells the story of her eventful career, placing it firmly within the colourful context of Tudor politics, court life and the developing administration of a permanent navy. And though the author also brings the story right down to the present day, with chapters on the recovery, the fresh ideas and information thrown up by the massive programme of archaeological work since undertaken, and the new display just recently opened at Portsmouth Historic Dockyard, it is at heart a vivid retelling of her career and, at the end, her dramatic sinking.

With this fine narrative and the beautiful illustrations the book will appeal to the historian and enthusiast, and also to the general reader and museum visitor.