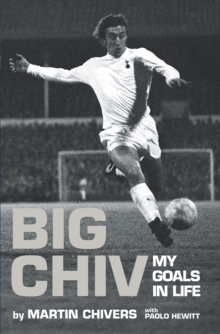 Big Chiv! : my goals in life

Martin Chivers is a footballing legend. In an era of huge, towering centre forwards he stood apart, combining a huge frame with cunning and grace.

Previously a teenage star with his hometown club Southampton (he is the only Southampton-born player ever to play for England), between 1968 and 1976 Chivers played 278 League games for Spurs, scoring 118 goals, an average of a goal every second game.

He is still Spurs' top European goalscorer and was one of the club's first inductees into their Hall of Fame.

In "Big Chiv", (the affectionate nickname he earnt from his adoring fans) Martin Chivers candidly looks back at a life that was from an early age driven by one thing and one thing alone - the desire to score goals.

He is especially revealing about the famous Spurs team of the 1970s, their characters and their exploits both on and off the field.

In particular, he examines in detail his love-hate relationship with the legendary Spurs manager, Bill Nicholson, which at times threatened to spill into violence but yet ended in deep and affectionate friendship. "Big Chiv", written with acclaimed author and lifelong Spurs fan Paolo Hewitt, is the story of a remarkable footballer with an unquenchable desire to score goals.

Beyond that it reveals what it was like to be a footballer in the golden age of the game.

He tells his story with great insight, candour and humour.

It is the book many football followers have been waiting a long time to read.