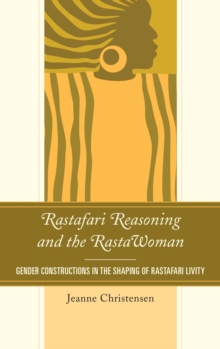 Rastafari reasoning and the Rastawoman: gender constructions in the shaping of Rastafari livity

Lexington Books
0739175742 / 9780739175743
eBook
299.676082
14/02/2014
Available
English
203 pages
Description based on CIP data; resource not viewed.
Rastafari Reasoning and the RastaWoman:Gender Constructions in the Shaping of Rastafari Livityexamines the complex ways that gender and race shaped a liberation movement propelled by the Caribbean evolution of an African spiritual ethos. Jeanne Christensen proposes that Rastafari represents the most recent reworking of this spiritual ethos, referred to as African religiosity. The book contributes a new perspective to the literature on Rastafari, and through a historical lens, corrects the predominant static view of Rastafari women.

In certain Rastafari manifestations, a growing livity developed by RastaMen eventually excluded women from an important ritual called "Reasoning"—a conscious search for existential and ontological truth through self-understanding performed in a group setting. Restoring agency to the RastaWoman, Christensen argues that RastaWomen, intimately in touch with this spiritual ethos, challenged oppressive structures within the movement itself. They skirted official restrictions, speaking out in public and written forums whenever such avenues presented themselves, and searched for their own truth through conscious intentional self-examination characteristic of the Reasoning ritual.

With its powerful, theoretically informed narrative,Rastafari Reasoning and the RastaWoman:Gender Constructions in the Shaping of Rastafari Livitywill appeal to students and scholars interested in religious transformation, resistance movements, gender issues, critical race studies, and the history and culture of the English-speaking Caribbean.