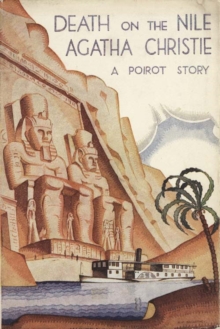 Death on the Nile

HarperCollins Publishers Ltd
0007234473 / 9780007234479
Hardback
823.912
04/09/2006
Stock expected by 24/04/2021
United Kingdom
English
Classic crime
19 cm 284 p.
general  Learn More
Facsim. of ed. published: London: Collins, 1937.
A facsimile first edition hardback of the Poirot books, published to mark the 80th anniversary of his first appearance and to celebrate his new-found success on television. / Market research shows that two out of three of all fiction readers have read an Agatha Christie book, and more than half want to read her again / Follows the popular and acclaimed Miss Marple first edition facsimile series in 2005/6. / Very collectable and affordable at GBP10.00 each. (The successful Ian Fleming/James Bond facsimile editions were GBP25.00 each.) / Sports the original pre-war first edition jackets and offs

This is a facsimile first edition hardback of the Poirot books, published to mark the 80th anniversary of his first appearance and to celebrate his new-found success on television.

The tranquility of a cruise along the Nile was shattered by the discovery that Linnet Ridgeway had been shot through the head.

She was young, stylish and beautiful. A girl who had everything until she lost her life. Hercule Poirot recalled an earlier outburst by a fellow passenger: 'I'd like to put my dear little pistol against her head and just press the trigger.' Yet in this exotic setting nothing was ever quite what it seemed!

To mark the 80th anniversary of Hercule Poirot's first appearance, and to celebrate his renewed fortunes as a primetime television star, this collection of facsimile first editions will be the perfect way to enjoy these books in their original form - 15 novels and one short story collection.

Reproducing the original typesetting and formats of the first editions from the Christie family's own archive copies, these books sport the original covers which have been painstakingly restored from the best available copies, reflecting five decades of iconic cover design.