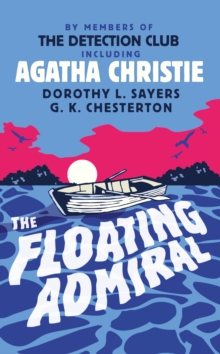 By: Christie, Agatha,  Members of The Detection Club,  Brett, Simon(Preface by),  Chesterton, G. K.(Prologue by),  Berkeley, Anthony(Epilogue by),  Sayers, Dorothy L.(Introduction by)

Agatha Christie, Dorothy L. Sayers, G.K. Chesterton and nine other writers from the legendary Detection Club collaborate in this fiendishly clever but forgotten crime novel first published 80 years ago. Inspector Rudge does not encounter many cases of murder in the sleepy seaside town of Whynmouth.

But when an old sailor lands a rowing boat containing a fresh corpse with a stab wound to the chest, the Inspector's investigation immediately comes up against several obstacles.

The vicar, whose boat the body was found in, is clearly withholding information, and the victim's niece has disappeared.

There is clearly more to this case than meets the eye - even the identity of the victim is called into doubt.

Inspector Rudge begins to wonder just how many people have contributed to this extraordinary crime and whether he will ever unravel it... In 1931, Agatha Christie, Dorothy L. Sayers and ten other crime writers from the newly-formed `Detection Club' collaborated in publishing a unique crime novel.

In a literary game of consequences, each author would write one chapter, leaving G.K.

Chesterton to write a typically paradoxical prologue and Anthony Berkeley to tie up all the loose ends.

In addition, each of the authors provided their own solution in a sealed envelope, all of which appeared at the end of the book, with Agatha Christie's ingenious conclusion acknowledged at the time to be `enough to make the book worth buying on its own'. The authors of this novel are: G. K. Chesterton, Canon Victor Whitechurch, G. D. H. Cole and Margaret Cole, Henry Wade, Agatha Christie, John Rhode, Milward Kennedy, Dorothy L.

The title has been replaced.To check if this specific edition is still available please contact Customer Care +44(0)1482 384660 or schools.services@brownsbfs.co.uk, otherwise please click 9780008210687 to take you to the new version.