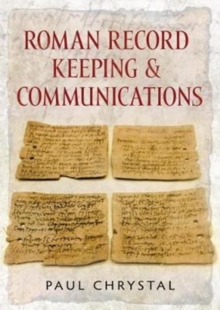 The assumption is that most of what we know about the Romans and their history comes from Roman and Greek historians.

While this is true up to a point, the reality is that there are many other primary sources which combine to give us the composite picture we have today of the Romans and their world.

The Romans had in effect their own brand of social media, engineered to disseminate information, legislation, propaganda and misinformation to state and religious officials, citizens, the military and to the enemy, wherever they be.

We know what the Romans did for us: roads, central heating and so on.

But, just as importantly, they developed and perfected records and record-keeping and other methods of information storage and communication.

It is the Roman preoccupation with record keeping and dissemination that informs the picture we have today of Roman civilisation.

This is the first book to analyse what is in effect Roman social media: the keeping of records and archive material, and ways of communicating it.

Uniquely, it assesses the impact this information had on and in Roman history and on our appraisal of that history.