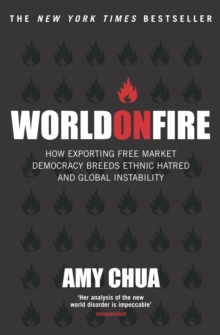 Adding democracy to this volatile mix can unleash suppressed ethnic hatred and bring to power 'ethno-nationalist' governments that pursue aggressive policies of confiscation and revenge.

Chua also shows how individual countries may also be viewed as market-dominant minorities, a fact that may help to explain the rising tide of anti-American sentiment around the world and the visceral hatred of Americans expressed in recent acts of terrorism.

Chua is not an anti-globalist. But she presciently warns that, far from making the world a better and safer place, democracy and capitalism - at least in the raw, unrestrained form in which they are currently being exported - are intensifying ethnic resentment and global violence, with potentially catastrophic results.