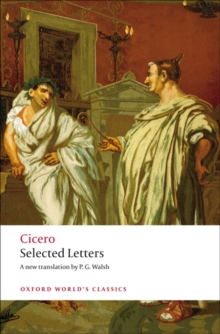 By: Cicero,  Walsh, P. G. (Emeritus Professor of Humanity at the University of Glasgow)(Translated by)

'How I wish that you had invited me to that most attractive feast on the Ides of March!'Cicero lived through some of the most turbulent years in the history of Rome, and witnessed at first-hand the overthrow of the republic and its replacement by a tyranny.

His letters to friends and family are an astonishingly detailed record of daily life and politics in Rome. This selection, covering the years 68-43 BC, not merely documents in detail Cicero's career but simultaneously provides a month-by-month record of the final collapse of the Roman senatorial government. The lettersprovide from the inside a vivid picture of events from the high point of Cicero's consulship of 63, through the humiliation of his exile and subsequent subjection to the dynasts, to the assassination of Caesar in 44, and Cicero's brief hour of glory in leading senatorial resistance to the tyranny of MarkAntony. In P. G. Walsh's lively new translation, Cicero's correspondence once more brings alive the excitement and danger of ancient Rome.