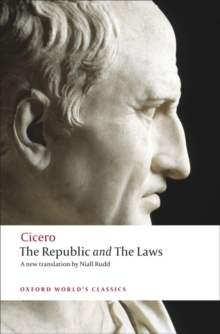 `However one defines Man, the same definition applies to us all.

This is sufficient proof that there is no essential difference within mankind.' (Laws l.29-30) Cicero's The Republic is an impassioned plea for responsible governement written just before the civil war that ended the Roman Republic in a dialogue following Plato. Drawing on Greek political theory, the work embodies the mature reflections of a Roman ex-consul on the nature of political organization, on justice in society, and on the qualities needed in a statesman. Its sequel, The Laws, expounds the influential doctrine of Natural Law, which applies to all mankind, andsets out an ideal code for a reformed Roman Republic, already half in the realm of utopia.

This is the first complete English translation of both works for over sixty years and features a lucid Introduction, a Table of Dates, notes on the Roman constitution, and an Index of Names.