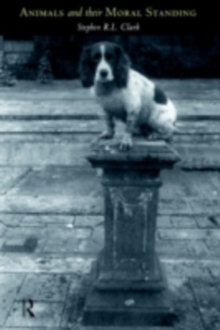 Animals and their moral standing

Routledge
0203004264 / 9780203004265
eBook (Adobe Pdf)
179.3
03/04/1997
Available
England
English
159 x 235 mm 100 pages
Copy: 30%; print: 30%
Twenty years ago, people thought only cranks or sentimentalists could be seriously concerned about the treatment of non-human animals. However, since then philosophers, scientists and welfarists have raised public awareness of the issue; and they have begun to lay the foundations for an enormous change in human practice. This book is a record of the development of 'animal rights' through the eyes of one highly-respected and well-known thinker.
This book brings together for the first time Stephen R.L. Clark's major essays in one volume. Written with characteristic clarity and persuasion, Animals and Their Moral Standing will be essential reading for both philosophers and scientists, as well as the general reader concerned by the debates over animal rights and treatment.