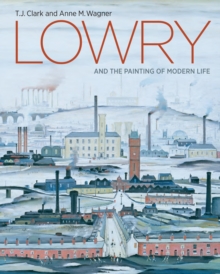 Lowry and the painting of modern life

This book accompanies a long overdue retrospective of the much-loved British painter L.S.

Bringing together around eighty works, the aim is to re-assess Lowry's contribution as part of a wider art history and to argue for his achievement as Britain's pre-eminent painter of the industrial city. Although Lowry's most frequent subjects were drawn from a pattern of streets he walked daily, he is not straightforwardly a 'realist' artist nor really an 'impressionist' artist, though there are few twentieth-century British artists who engaged more fruitfully with the French tradition.

For Lowry modern painting needed a mode of observation capable of representing the remaining rituals of public life: football matches and protest marches, evictions and fist-fights, workers going to and from the mill.

Without his pictures, Britain would arguably lack an account in paint of the experiences of the twentieth-century working class.

Above all, Lowry was a landscape painter and wished to show what the industrial revolution had made of the world. Lowry and the Painting of Modern Life will bring together the artist's late urban panoramas, where a leap up to 'history painting' size indicates the measure of his final ambition. Written and curated by the eminent art historians T.J.

Clark and Anne Wagner, this new study promises to be the most fresh and incisive approach yet to the study of the one of the nation's most popular painters.