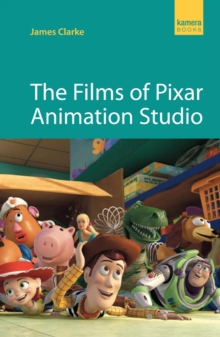 The films of Pixar Animation Studio

One of the major icons of modern cinema, and hugely influential on pop-culture over the past three decades, Pixar Animation Studios has proved to be an endless source of imagination and delight for children and adults alike.

From the Toy Story Trilogy to Brave, The Incredibles to Ratatouille, its films have played a vital role in reminding audiences around the globe of animation's capacity as both an entertainment and an art form.

Every feature sits on the 'top 50 highest-grossing animated films of all-time' list, and with over 200 awards to their name, including numerous Oscars, they're as revered by critics as they are successful at the box-office. The Films of Pixar Animation Studio offers a one-stop guide to the studio's entire back catalogue, discussing in-depth the creative choices behind each film, and their place within the wider cinema landscape and animation history.

It also offers an insight into their very particular way of working, and the role of the films' producers, writers, directors and animators on each project, examining their colourful and original use of a folk-tale sensibility, and their unique aesthetic.