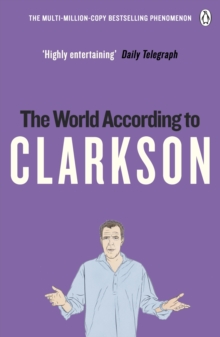 The world according to Clarkson

Jeremy Clarkson shares his opinions on just about everything in The World According to Clarkson.

Jeremy Clarkson has seen rather more of the world than most. He has, as they say, been around a bit. And as a result, he's got one or two things to tell us about how it all works; and being Jeremy Clarkson he's not about to voice them quietly, humbly and without great dollops of humour.

In The World According to Clarkson, he reveals why it is that:

Too much science is bad for our health

'70s rock music is nothing to be ashamed of

We must work harder to get rid of cricket

He likes the Germans (well, sometimes)

With a strong dose of common sense that is rarely, if ever, found inside the M25, Clarkson hilariously attacks the pompous, the ridiculous, the absurd and the downright idiotic, whilst also celebrating the eccentric, the clever and the sheer bloody brilliant.

Less a manifesto for living and more a road map to modern life, The World According to Clarkson is the funniest book you'll read this year. Don't leave home without it.

'Outrageously funny . . . will have you in stitches' Time Out

Number-one bestseller and presenter of the hugely popular Top Gear, Jeremy Clarkson writes on cars, current affairs and anything else that annoys him in his sharp and funny collections. Born To Be Riled, Clarkson On Cars, Don't Stop Me Now, Driven To Distraction, Round the Bend, Motorworld, and I Know You Got Soul are also available as Penguin paperbacks; the Penguin App iClarkson: The Book of Cars can be downloaded on the App Store.