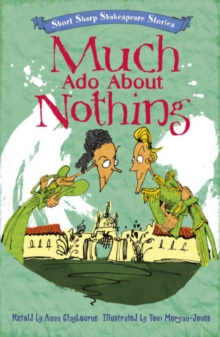 Much ado about nothing - 5

Mistaken identities, deceipt, lovers' quarrels and a happy ending... discover the entertaining story at the heart of Much Ado About Nothing, one of Shakespeare's best-loved comedies.

The age-appropriate text in Short, Sharp Shakespeare: Much Ado About Nothing introduces readers to the play by re-telling the story in modern English, making it an ideal introduction to Shakespeare for children of 9 and above.

The book also contains information about the background to Much Ado About Nothing, its major themes, language, and Shakespeare's life during the time he was writing the play, so is a useful resource for project work, or for anyone studying the play itself.Gossip, and its role in society in 16th century England, is also examined, to give the play a factual grounding.Anna Claybourne's concise, witty text really brings out the humour and the drama of the stories, rendering them as relevant today as they were in Shakespeare's time.

Short, Sharp Shakespeare allows children today to be as enthralled by Shakespeare's tales as audiences were 400 years ago.

Other titles in the series include Macbeth, A Midsummer Night's Dream, The Tempest, Romeo and Juliet and Hamlet.