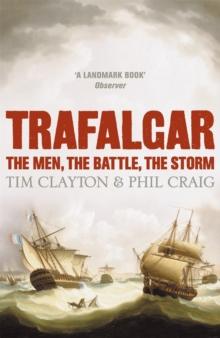 Trafalgar : the men, the battle, the storm

Against him stood the Royal Navy and the already legendary Admiral Horatio Nelson.On 21 October 1805, a massive naval battle off the coast of Spain decided mastery of the seas.

Then, over the following days and nights, the battleships and their exhausted crews endured a gale of awesome fury.

As Captain Charles Tyler wrote to his wife Margaret, 'the wind blew a perfect storm'.The authors of the bestselling FINEST HOUR tell this story not only through the diaries, letters and memoirs of the men who wrestled with the enemy and the elements, but also through the eyes of their wives and children.

Whether you are already familiar with this period of history or are coming to it for the first time, TRAFALGAR is a book that will enthral as it illuminates an event whose repercussions still echo today.