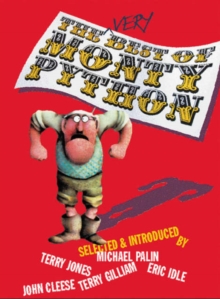 The very best of Monty Python

Over the years the six of them followed this with another 44 extremely silly programmes, a German TV special, five full-length feature films, seven books, nine long-playing records and live stage shows that toured the UK, Canada and America.

In "The Very Best of Monty Python", each of the surviving Pythons makes a personal choice of their favourite bits from the vast Python oeuvre.

These include: why accountancy is not boring, spamelot, the Piranha brothers, the lumberjack song, the larch, every sperm is sacred, the ministry of silly walks, always look on the bright side of life, nudge nudge wink wink, rat recipes, albatross, constitutional peasants, spam, monsieur creosote, the meaning of life, i'm so worried, stan's right to have babies, careers advice for mr anchovy, the truth about protestants, the news for parrots, what have the romans ever done for us! the undertaker sketch, find the fish, how to talk to the queen, and many other classics of silliness.