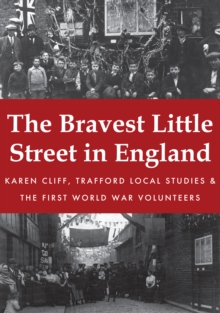 The bravest little street in England

From a modest street in Altrincham of not more than sixty-one houses, at least 158 men enlisted and fought in the First World War.

The bravery and in some cases sacrifices of these men was recognised by King George V, who congratulated the street on its 'patriotism and fighting spirit so prominently displayed'. Chapel Street had a strong military tradition dating back much further than 1914.

Men who had fought in the Anglo-Boer War returned to the forces and they were joined by their sons, brothers and nephews.

The stories of these men offer a poignant insight into a myriad of wartime experiences.

There were Distinguished Conduct Medals for bravery, desertions, loss of loved ones, a wartime romance and, in one memorable incident, even the rescue of a future Prime Minister.

In 1919 a Roll of Honour was erected on the street, listing all the men who went to war, with a central panel to commemorate those who never returned.

Trafford Local Studies used this list as a starting point from which to explore the biographies of the men from birth until death.

In addition, the book looks at the highs and lows of their family lives, and in some cases, the struggles to keep their families together.

On a lighter note, there is a look at the street's social scene and the Rose and Shamrock public house, where many an evening was spent drinking and socialising, ending with the occasional falling-out. As part of the First World War commemoration, and following four years of research by Trafford Local Studies staff and a group of volunteers, this book tells the fascinating story of this remarkable little street, 'the bravest little street in England'.